12 Apps That Help People with Speech and Communication

People with speech challenges can easily become frustrated when trying to communicate with caregivers, friends, family, and loved ones. Whether they are unable to speak due to a disability, or their speech is too weak or inarticulate to understand, being unable to communicate one’s own thoughts, feelings, needs, and desires is incredibly frustrating and limiting. Parents and caregivers can also become frustrated when they are unable to understand their loved one.

With the technology that is available today, communication aids are becoming much more common and accessible. There are now many apps that help people with disabilities to speak and communicate more easily and effectively. Depending on the individual’s disability or specific struggles, apps with different features will work better for different people. 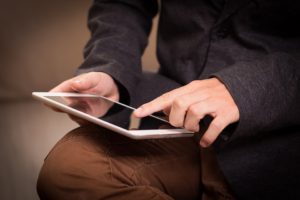 iConverse – iConverse is a tool designed for individuals with communicative disabilities. iConverse is an AAC app for the iPhone and iPod Touch that replaces bulky and expensive communication devices used in the past. This app gives users the ability to carry an AAC device in their pocket, creating a means of communication that is appropriate, effective and discreet. It comes with 6 communication tiles that represent a person’s most basic needs. When activated by touch, the icons give both an auditory and visual representation of the specific need or want. iConverse allows parents, teachers, and the general public to understand the basic wants and needs of individuals who are unable to verbally communicate.

MyTalkTools Mobile – MyTalkTools Mobile is an AAC app that helps people with communication difficulties say what they want with sequences of words, sounds, and images. Users can choose simple grids or boards with bold images and the app will play recorded sounds when an image is touched. The words and sequences even allow users to form complete sentences.

Open Sesame – Mobile phones have become a common need for everyone, including people with disabilities. Millions of people have limited use of their hands, which prevents them from doing activities that most of us take for granted and regular phones are not equipped for the needs of people with limited mobility. Open Sesame uses the front-facing camera of any Android device to track head movement and unlock a touch-free smartphone, allowing the user to type text, make phone calls, and use other features.

Predictable – Predictable is designed for people who are literate but do not have the ability to speak, due to cerebral palsy, motor neuron disease, laryngectomy, autism, stroke, apraxia, brain injury, or any other condition that affects a person’s speech. When users start typing on Predictable, the app predicts what the person wants to say and reads the sentence, giving a voice to people who don’t have one.

Proloquo2Go – This app works as a daily communication tool for those who have trouble speaking. From the first time someone opens the app, a few taps are all it takes to start talking to the world. This symbol-based app helps users learn how to express themselves. Proloquo2Go is customizable and designed for a range of fine-motor and visual skills, making it useful for non-verbal people with autism, Down syndrome, cerebral palsy, and a range of other diagnoses.

Proloquo4Text – This app helps those who have speech challenges communicate confidently. Proloquo4Text’s intuitive word and sentence prediction takes what the user types and anticipates what they might say next, saving time and effort. Proloquo4Text’s versatility makes it useful for people with autism, cerebral palsy, ALS, and a range of other diagnoses.

RogerVoice – RogerVoice breaks down communication barriers by making voice calls visually accessible through instant and real-time text captioning, or by video call with a sign language interpreter. With RogerVoice, users can subtitle calls with voice recognition, call for free to others who have the app, make subtitled video calls, request an interpreter for calls, reread calls with transcript history, and respond orally or in writing.

Talkitt – Talkitt is an app that helps people with speech and language disorders to communicate. Talkitt translates unintelligible pronunciation into understandable speech. It works by learning the user’s speech patterns, creating a personal speech dictionary, and identifying, recognizing, and translating the person’s speech so the individual is more easily understood.

Talk for Me – Text to Speech – Talk For Me – Text to Speech allows a user to type in the main text area or tap one of six main custom buttons, and the iOS device will talk for them. With keyboard shortcuts, predictive text, and custom phrases, this app allows users to communicate with ease.

Voice4U – Voice4u is a picture-based communication app for those who have speech challenges. It is a portable, customizable, and easy-to-use communication tool designed to help bridge the communication gap and allow parents and caregivers to have a better and more accurate understanding of the individual’s wants and needs.

Are there other apps that you have found to be helpful for speech and communication? Reach out to us on Facebook and let us know!

This site uses Akismet to reduce spam. Learn how your comment data is processed.